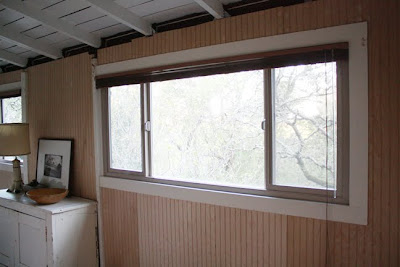 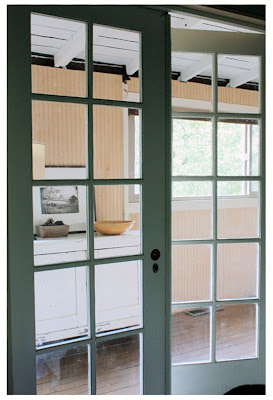 so, we used a composite paneling for the front room, and it looks great, but for the front hallway i really wanted to use some real wood. it also makes a difference that the faux wood is $19 a sheet vs. the $40 for the real stuff. you could say we are being really selective where to invest.

i had no idea how much materials were going to cost for this home project and i am constantly being challenged with budget creativity. part of my career is about negotiating, but let me tell you...you cannot negotiate at home depot. :) i have a feeling that further down the road you are going to see some re-purposed wood from some of our earlier demo projects.

this brings me to the front hallway. we finally got the paneling up (real wood). the finishing work schedule is still TBD, but we are still enjoying the progress.

the photo through the french doors is from the master bedroom. we decided to put the french doors in to bring in some natural light and last sunday morning when i was laying in bed i realized how much this was the right decision. big shout out to our friends larry and jim for the "free" french doors.
Posted by brock street at 8:36 PM 11 comments: 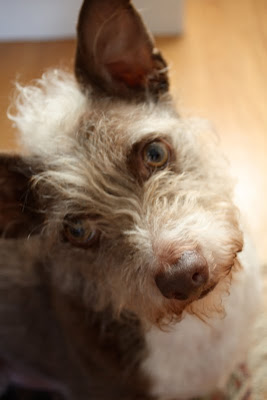 need i say more. valentines never meant so much when pets weren't around. i remember making valentines for our dogs growing up, and the horses, and the ducks....and you get the point.

b-mo wishes you a day full of caring thoughts and something with sprinkles on it.
Posted by brock street at 7:08 AM 9 comments: 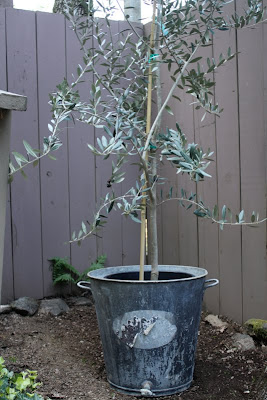 well, another weekend up north without a contractor...so we succumbed to the calling of the great outdoors and the 3/4 acres that has not had much TLC in, what we believe, to be about 6 or more years.

one of the many highlights was this little olive tree distraction. we needed to get some gravel at home depot (to use a gift card up), but they did not have anything very interesting in their gravel/rock selection. bummer.

in my shock and awe of home depot not having the gravel, with my head down and on my way from the garden center back into the warehouse box of home depot, i heard something/someone calling out my name. i followed that gentle sing-song of a voice to the place where this olive tree was standing. the 10am northern california sun was glistening just so on those silver lined leaves and branches and it was as if the king was coming to hillside and he demanded this tree/spirit be present.

ok....i'm sure i have totally lost you all in my rambling, but the point is it was a match made in heaven. the real miracle is that it fit in the car :)

the zinc container somehow made it to sf from france and then onto our property, courtesy of my friends coco and fred. it had most recently been a table for the tv and vcr at hillside, but i think it is perfectly outside.
Posted by brock street at 4:05 PM 5 comments:

to paint or not to paint 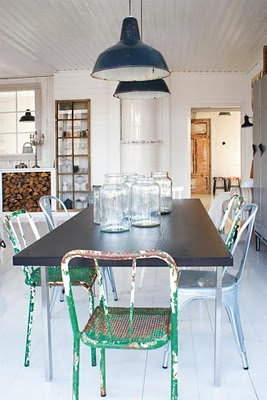 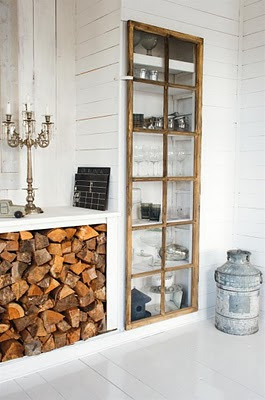 it is more common than not that when we get together with friends, the status of the cabin comes up...hence the conversation of what are you going to do with the walls and floors.

there can be a bit of vacillating as well as difference of opinions (depending on the day and mood), but the touchstone i always come back to is this...paint it all. the small, dark space nestled in the tree's is crying for more light. actually, begging in my opinion, but there goes that "cabin" feel.

as we all know, there are more grand and pressing issues (health, peace, hope,love) in all of our lives that override these trivial decisions, but if you have a moment to share your opinion, i promise to listen. :)

looking forward to the post and reveal of "the floors".

btw...this room is just what the doctor ordered: reclaimed, chipped, practical and you can feel the movement of light. 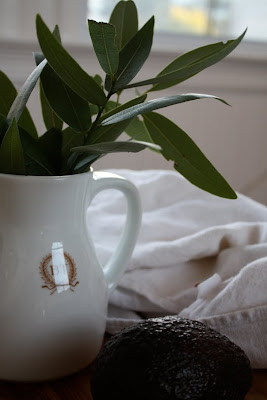 one of the all time favorite gifts from our new property is the land. when you all come for your visit you will see what i mean. when you open the car door you are taken aback by the potent overwhelming (the good kind i hope) fragrance from the bay trees.

so herbal, so clean...it opens up your lungs and brings a bit of calm to the beaten down city dweller.

i did not know that bay leaves came from big tree's...i just assumed they were shrubs or small plants, but not...big, huge and seemingly invasive trees. these trees are scattered over the 3/4 acres along with many other indigenous trees i have not yet identified.

so, bring your shears and load up for cooking and the best kind of simple and no nonsense arrangements .

these little branches made it back to the city and are bringing a bit of the country to busy movement of the mission district.
Posted by brock street at 6:45 PM 4 comments: 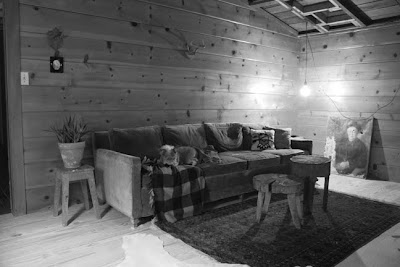 had to convert to black and white as the lighting was bad and the lacquered pine walls really put a punch in the sepia tone. (hard on the eyes)
Posted by brock street at 9:04 PM 10 comments: