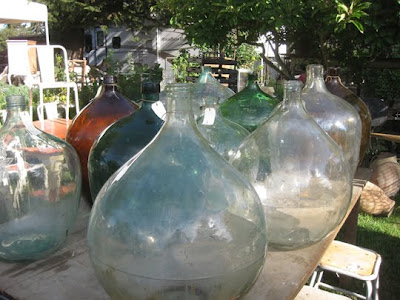 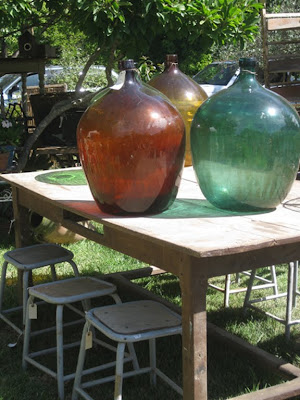 its that time of year again when french container lands in california and i rushed to the bi-annual gathering of the crazies for my moment to crazy (my nature is calm, quiet, concerned for others, but this brings out the powerful, bulldozing shopper not to be be reckoned with..kidding)

the frenzie begins quite early and you go armed with sold tags, tape, sharpies and a focus that can't even be broken by a UFO hovering over your head (there have been sightings in this part of the woods, so they say).

i continue to have an aversion for glass bottles and these were some doozers. this was my first stop and i quickly tagged my bottle and continued on. an hour or so later i made it back to the table to find that someone else had put there tag on the other side of the bottle and the concerning part was she had tagged all the other clear bottles on the table (there were 8 of then including the ones on the ground) so i thought for sure the seller would give it to her since she was buying the rest and mine was the best one on the table :0). i said a prayer to the local cactus gods.... and they heard me. i outdid the bottle mogul and was lucky to come home with one special wine bottle from Belgium.
Posted by brock street at 6:59 AM

These bottles are just beautiful - you must showcase the one you snagged in a future post. Can't wait to see how you use it. This sounds like such a fun outing!

Just discovered your blog - it's *wonderful*! I'm not familiar with the container arrival...where does it come to, and how do you stay in the loop on that? Thanks!

Interesting blog you got here. It would be great to read a bit more concerning this theme.
BTW check the design I've made myself A level escort